Are You Losing Diveristy on Your Sales Team?

Resources Blog Are You Losing Diveristy on Your Sales Team?

“Diversity” has become a buzzword in industries of all kinds, conjuring images of kitschy team-building exercises and hodge-podge task forces devoted to encouraging employees from all walks of life. As trendy as the topic of diversity may be, the truth is that sales in particular is in most cases still lacking on that front, and not because they forgot to add an identity exercise to their staff retreat.

A 2018 report from data USA revealed that the sales industry still predominantly male and white. 67.8% of sales representatives are male, and 83.4% are white, and the stats from the preceding four years show almost no variation. And research from McKinsey confirmed that “while certain industries perform better on gender diversity and other industries on ethnic and racial diversity, no industry or company is in the top quartile on both dimensions.”

With all the buzz around diversity, how are we still not rising to the occasion? Our overall understanding of identity is rapidly expanding beyond gender, ethnicity, ability, economy, social circumstances, and more. So why is it that sales, an industry striving to become increasingly customized to its audience, is still so homogenous?

In our globalized society, an industry that isn’t diverse is on its way to becoming quickly irrelevant to the majority of the population. Alexandra Adamson, Director of Talent at Bowery Capital, notes that companies often don’t realize their lack of diversity until it becomes a significant problem that requires “turning the ship around,” which is “the last thing that sales, an industry operating on a 30 day cycle, wants to hear about.”

However, neglecting to address diversity on your sales team could in fact hurt your bottom line, regardless of how fast your pipeline may be. McKinsey and Company found that in the U.S. “there is a linear relationship between racial and ethnic diversity and better financial performance.” Their study showed that companies “in the top quartile” for diversity are 35% more likely to have financial returns above national industry medians.

Perhaps this is because, as Harvard Business Review discovered, “a team with a member who shares a client’s ethnicity is 152% likelier than another team to understand that client.” And the more empathy and understanding that develop between the client and rep, the higher the chances of making a sale.

Additionally, by nature of human interaction, diversity also improves company reputation and increases the chances of not just returning clients, but referrals too. For example, as a disabled woman I am apt to support the businesses of my disabled peers, who are often forced to work harder to make ends meet due to discriminatory hiring practices and sub-minimum wage. U.S. Census Data shows that 1 in 5 Americans are disabled, approximately a whopping 20% of the country’s population. It’s a large audience that many industries, sales included, have a tendency to overlook.

Minority communities often network together to support each other and advocate for one another. If I find that a company accommodates employees with disabilities and compensates them fairly, I will buy from that company when I can, and recommend it to others, disabled and abled alike. A similar principle holds true for ethnic and racial minorities, LGBTQIA individuals, and more. In fact, such communities often intersect, meaning that diversity often speaks to a wider and more interconnected audience than initially assumed.

At this point, it should be noted that reaping the incredible benefits of diversity is more than just an exercise in public relations. For example, consider the controversy surrounding “Rainbow Capitalism” that surfaced during Pride month, or brands accused of “pinkwashing” every year for breast cancer awareness. There is a difference between the marketing ploys used to simulate diversity, and actual diversity within your company.

Here are some ways to make sure your team isn’t just covering white-washed sales teams in appealing branding initiatives.

Implementing diversity should start at the top. Jason Medley, VP of People Operations at Imgur, explains that in order for diversity initiatives to truly go beyond the surface, there must be executive buy-in. At Imgur, they take it a step further, using bonuses as an incentive for reaching initiative goals.

While bringing bonuses into the mix is optional, executive buy-in to diversity and inclusion is critical. As Gigster’s recent diversity panel concluded, “recognizing that there is an issue and expressing intent simply isn’t enough to make a difference.”

What Does the Data Tell You?

An easy way to tell where your team sits on the scales of diversity is looking at your people data. Look at the demographic data and engagement data, and search for patterns. Does it show a variety of demographics? Or is engagement limited to the majority?

Erin Wilson, cofounder of Hirepool, adds that analyzing people data provides further incentive for the needed executive buy-in. The presentation of data often demonstrates to executives realities like “how a lack of inclusion can lead to attrition,” which quickly becomes incredibly costly.

Ultimately, data tells a broad narrative of your diversity story, and can reveal patterns that need to be replicated or turned on their head.

One of the strategies that has proven most successful for diversity initiatives is mentoring. This year, Estee-Lauder Company was named number one on Forbes’ list of America’s Best Employers for Women. The prolific beauty brand’s reputation of “ensuring equity among its employees,” and especially amplifying the voices of women, is backed up by its leadership and development practices.

In 2015, Estee-Lauder created the CEO Global Reverse Mentor Program which “pairs senior leaders with digitally savvy Millennial and Gen Z employees to learn from one another.” Millennial and Gen Z employees make up 65% of Estee-Lauder’s workforce, and through the mentoring program with sponsors, who can not only coach them, but serve as advocates to vouch for them and recommend them for various projects.

Such advocacy makes a huge difference for minority employees, who are unfortunately often naturally disadvantaged in professional situations, if for no other reason than subconscious bias. Mentoring between rising employees and those in positions of influence and power can provide excellent opportunities to leverage privilege for good.

Not All Sunshine & Rainbows

If your team is mostly male and white, turning things around and implementing diversity won’t be easy. There are more factors to diversity than recognizing minorities on social media feed, and being intentional about diversity and inclusion initiatives will take time and effort. But with the support of executive buy-in, armed with relevant data, and a team committed to widening its scope, diversity may not be entirely lost. 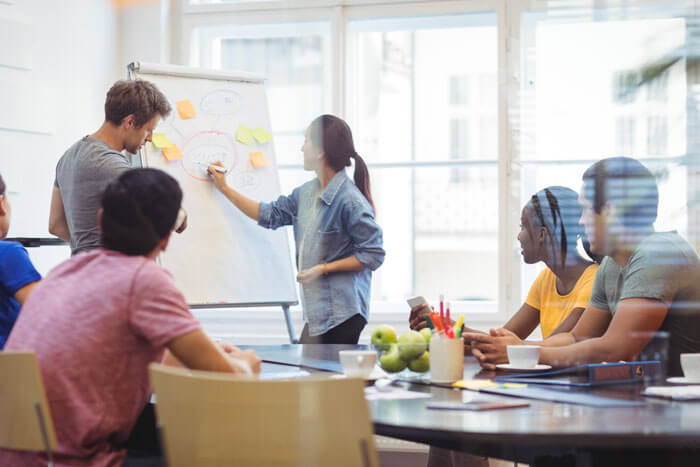