As new technologies are discovered and developed, widespread adoption doesn’t occur until viable business benefits can be identified and validated. Machine Learning, Cognitive Computing or Artificial Intelligence (depending on what you call it) is a “hot,” interesting new technology development, and one that is quickly proceeding through the hype cycle to widespread adoption. As a practical use case, Machine Learning can now be used to gain new, perhaps even unexpected insights into sales team engagement to predict sales turnover.

The Cost of Sales Turnover

Based on the Harvard Business Review, the rate of annual sales turnover among U.S. salespeople is as high as 27%—a rate that twice the average of the overall labor force. As employees pursue new employment, their replacements must be hired and trained, costing time, effort and resources.

Current estimates suggestion that the total cost to train salespeople in the U.S. is now about $15 billion a year, plus another $800 billion of incentives paid to accelerate the process. That is a big number! Other, intangible costs also exist, such as lower productivity by the remaining staff, when facing an exodus to the door, indirectly contributing to lost deals and lower margins overall.

Turnover costs include much more than just tangible costs, such as training. Opportunity costs are significant too, especially when a salesperson’s position sits empty for an extended period of time. This downtime extends beyond the first day when a new hire begins. They must not only be trained on their new position, but must then begin the process of engaging with clients to build (re-build) client relationships. It can take up to 6 months to get a rep fully up to speed.

Of course, some attrition is desirable. As poor performers quit or are terminated, the average overall team productivity will increase. Unfortunately, it is not always possible to predict or influence whether low or high performers make their way to the door – or is it?

If managers could identify good salespeople who are at risk of quitting before they give their notice, and take steps to retain them, their companies could realize substantial savings, performance improvement and higher overall productivity.

The best way to think of machine learning is as an application of artificial intelligence (AI) that provides systems the ability to automatically learn and improve from experience without being explicitly programmed.

Machine learning collects intelligence on application usage, sales person engagement and time spent on various activities during the day. Over time, this intelligence – when added to the context of sales persons who leave the company – can then be used to predict future behavior.

Four marketing professors from Georgia State University examined more than two years’ worth of data from a Fortune 500 telecommunications company that sells consumer electronics and software services. They created a quantitative model—the first of its kind—to predict which salespeople were likely to quit.

As explained in a leading research article published recently, the researchers studied data on 6,727 salespeople working in 1,058 stores, dividing it into two batches. One set of metrics dealt with how well each salesperson was doing; those numbers measured past performance (based on revenue generated), customer satisfaction, and how often monthly quotas were met. The second set measured “peer effects,” or the variation in performance among coworkers in the context of voluntary and involuntary attrition by store. The study controlled for geography, store size, and demographics.

The findings revealed several conclusions. High performing teams, as defined by those that consistently achieve quota, tend to have lower turnover. That should come as no surprise. The fact that these teams achieved their sales targets indicates a cohesive group that works well together. One would expect these teams have a lower chance of attrition. Further, a team that is in “high performance” mode will be compensated well, a further driver to reduce voluntary turnover.

What is interesting is that an inverted “U” shaped curve emerged from the findings. There are two groups of teams that offer a leading indicator to predict sales turnover. Higher performing teams, as outlined above, and low performing ones.

The group with the highest chance of turnover falls right between these two groups. The suggested rationale is that those in the low quota attainment group will have a hard time finding a new job, as their performance metrics are not as good. Finding another sales job is more difficult when your numbers are not good. Hence, they are less likely to leave (ironically, the group that you might want most to leave).

What results is a group most susceptible to leaving being right in between … they don’t perform at a high level, but are good enough to sell their capabilities to another employer, to perhaps earn more money or get a promotion. See the below chart comparing the likelihood to quit based on quota attainment. 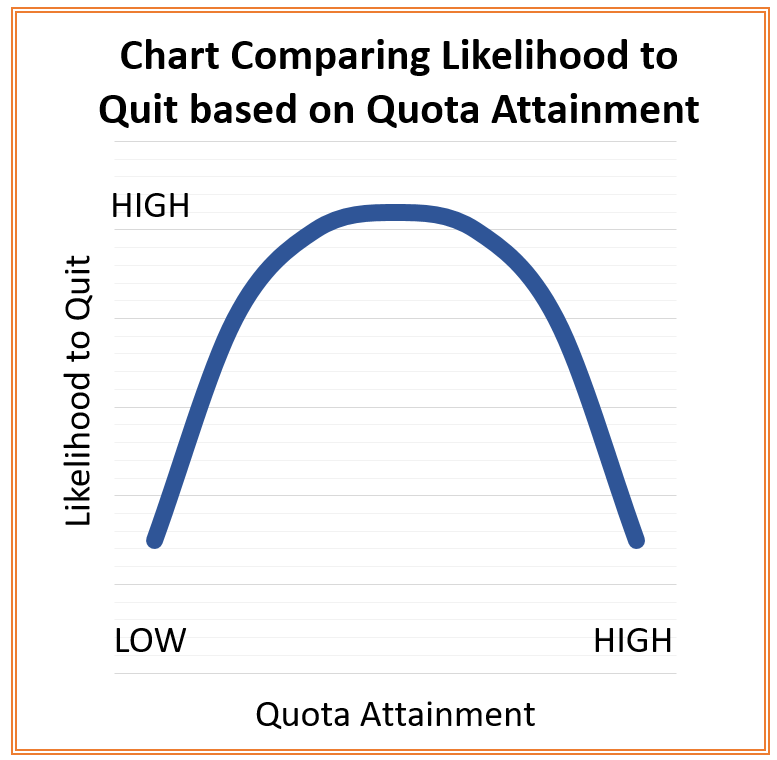 Another revelation from the research concerned what is referred to as a “peer effect,” which turned out to be the strongest predictor of quitting. This surprised the researchers. What they found was that in companies where there was not much variation in performance, people were less likely to feel challenged, so they may have little incentive to work harder or smarter. As a result, they are more likely to just leave.

In environments where there is high voluntary turnover (people choosing to leave), employees often lose faith in the company’s strategic direction. This makes sense. The employees who remain begin to second guess the company direction or choice of strategy. This feeling is reinforced every time they see a colleague leave.

In this type of situation, you begin to see a viral effect where the rate of departures accelerates. As the network of alumni grows, so too will the opportunities for hearing about new positions from each employee’s network.

Alternatively, when there’s a lot of involuntary turnover, employees may lack trust in managers, feel little job security, and make an effort to move on (think the middle group, at the top of the “U” curve). The researchers commented that an individual’s attitudes and intentions are heavily influenced by his or her environment. The strength of the peer effects in the model suggests that you can predict sales turnover, and that once it starts, it can be contagious.

It shouldn’t be difficult to see that a pattern has emerged. Certain behaviors are leading indicators that can be used to predict sales turnover. In fact, there are at least 13 “pre-quitting” behaviors, as identified by researchers at Utah State and Arizona State (source). I suspect there are likely many more, which simply haven’t been identified yet.

Here is where Machine Learning comes to play, and why Artificial Intelligence is being seen as a valuable tool to better understand organizational dynamics, but to begin to add real business value.

Applications now exist that can run queries on how team performance is occurring, and what correlations exist between teams. These findings can then be displayed visually – in an easy to read format, such as what is provided by Prodoscore. With this visibility, it is possible to automatically run queries that correlate the known behaviors that might predict future employee departures, to then identify those sales people more likely to quit.

Management can then act accordingly. For those individuals that management is concerned about losing, proactive steps can be taken to avoid a costly departure, helping to improve overall sales team productivity.

6 Leading Causes of Workplace Burnout and How to Mitigate It