Over three-quarters of CFOs recently surveyed by Bloomberg said they expect a recession by the end of 2020. However, this fall, unemployment rates fell below 4% while wages grew rapidly. Unemployment is still at record lows as we break in our business shoes for 2019.

So, what’s all the fuss about? Well, economists are stepping in to remind us that economics is, in fact, a cycle, and it would serve us well to be wary of such supposedly excellent conditions.

Nicole Smith, Chief Economist at the Georgetown University Center on Education and the Workforce, explains that those historically low unemployment rates are actually symptomatic of upcoming economic strife. This has been exhibited throughout history, where “at other times when the unemployment rate has fallen below 4 percent, it’s times where it was the boom phase just before recession,” and occasionally, just after war.

Researching the signs of recession leads to an onslaught of familiar looking, yet difficult to decipher charts and graphs. The one thing we can all take away from those graphs? Right after a major peak comes a pretty raggedy looking valley, which we see looming in the distance as the Federal Reserve continues to hike interest rates, which have followed a similar pattern.

The cyclical nature of it all makes a recession more predictable, though never completely so. It can also make us incredibly cynical if we’re not careful. The good news is that you too can prevent forest fires among the encroaching shadowy valleys of recession, looking out for signs in your industry and taking meaningful actions.

Be Mindful of Global Context

Unsurprisingly, slowing global growth is bound to affect the U.S. economy. Goldman Sachs researchers came up with a way to determine the extent of this ripple effect. According to their research, for every one percent decline in growth outside of the US, there’s a decline of at least half a point for US growth.

There’s already a 14% chance of US recession over the next year, but when you add a three percent decline in global growth, that increases those odds all the way to 46%. So it turns out that paying attention to current events around the world could give some strong indicators.

When it comes to looking out for a potential recession, don’t discount the influence of economic strife, even if it’s at a geographic distance.

Survey Sentiments with Your Industry

Investor Jeffrey Gundlach “tracks confidence as a leading indicator of recession,” and it makes sense for the confidence of both consumers and businesses to decrease during an economic slowdown. What Gundlach draws attention to currently is that even though expectations are employment are high, the confidence of business owners and consumers alike is starting to wane.

According to Gundlach, the Conference Board’s most recent survey in January showed the widest gap between current sentiment and expectations since March 2001. He even tweeted that this was  “the most recessionary signal at present,” stating that “It’s one of the worst readings ever.”

So apart from economic expectations, keep a close eye on the sentiments of your customers, competitors, and even your own business. A discrepancy between the conditions of the market and the confidence of those involved should raise some flags. 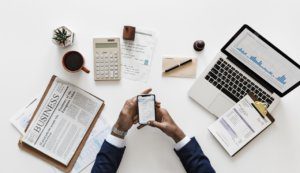 It’s easy to feel helpless in the face if such an involved economic system. After all, there are many aspects of the market that just don’t depend on you. But one thing that you can definitely do, especially at a time when employment is high and job offers must become more tantalizing, is doing what is in your power to retain your top talent.

This means keeping an eye on metrics to pinpoint your most productive and valuable team members. That way, you know who to appreciate and incentivize to ensure that whatever the economic weather, you’ll still have their strong performance to help you fend off the flames of encroaching downturn.

Responding to recession accordingly doesn’t just mean retaining your high performers, it also means coaching those mid-performers and staying proactive so that economic disaster doesn’t reduce you to a state of catastrophe.

Use performance metrics like Prodoscore’s to spot low performers or concerning trends before they become overwhelmingly problematic at the end of the quarter. That way, like any good scout, you can be prepared no matter what the economy brings.

Signs of a recession may be showing their faces, but you don’t have to sit around waiting for the worst of the downturn to arrive. You have the power to observe and act so that your business will still be there when the economy’s back on the upward climb again.