Resources Blog Why Everyone Agrees You Should Ditch the Yearly Review

Why Everyone Agrees You Should Ditch the Yearly Review

After years of debate over the efficacy and necessity of yearly or bi-annual performance reviews, it seems that professional opinion and research are finally coinciding to agree that this traditional performance management method is outdated. And, it will soon be replaced or overpowered by more frequent, flexible, and data-informed methods.

Studies over the past year have drawn attention to the disparities in the usual forms of performance management. Reflektive, in conjunction with Wakefield Research, found in April of 2018 that 61% of employees surveyed agreed performance reviews are outdated, and 94% would prefer mistakes and development be addressed in real time.

MIT’s Global Performance management study, released this year, demonstrates that those in management positions are starting to agree with those discontented employees. The performance review is officially old news, in more ways than one.

The ever-growing millennial workforce has been key in the demand for transparency from corporations, and especially their employers. Dan Negroni is the founder and CEO of Launchbox, and author of “Chasing Relevance: 6 Steps to Understand, Engage, and Maximize Next Generation Leaders in the Workplace.” Negroni reminds readers that millennials already make up approximately 40% of the workforce, and they are changing the way that we work. And not only the ways that we work, but also how we decide to evaluate them.

Negroni explains that the millennial craving for authenticity is a result of being “bombarded through technology with a crazy amount of inauthentic things.” In business, there’s a bad habit of beating around the bush, but all employees, millennial or not, have a desire to learn and grow and would like to know what to do to get there.

So, pushing faults under the rug until it’s time for review isn’t really helping anyone develop. Kelly Kuras of General Motors explains that in 2019, employees want to know how they’re doing and what to develop to go “further and faster” in real time.

There is something to be said about retrospective in life, but in sales, relying on retrospective to manage performance just doesn’t keep up with the rapidly growing and changing pace of the industry. Who wants to realize that making fixes a few months ago could have saved several deals? Extra time spent with bad sales habits is time wasted.

Also, what was relevant and glaring in one year may not be as important the next year. This doesn’t mean that those things shouldn’t be addressed, but rather that we’re better off addressing performance issues in real time while notes and coaching can still actually be of some assistance. 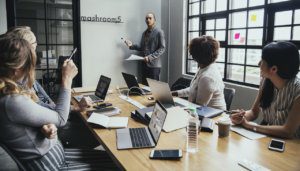 A Reflektive infographic demonstrates that executives spend an average of 15 hours outside of the office preparing for performance reviews, let alone the time they (hopefully) spend on coaching and development inside the office.

Their research also shows that preparing all of the necessary forms is stressful enough in itself. In fact, 58% of executives reschedule or delay reviews so that they have time to prepare the necessary materials. That’s right, the same reviews they spend those 15 hours outside of the office preparing for already. The cost of productivity here is striking, considering the time allocated for reviews and their preparation which would be more economically used for the work being reviewed.

Furthermore, the review process is unnecessarily stressful for employees as well as managers. While there’s an understandable amount of pressure that comes with any workplace situation, the reality is that the majority of employee stress often stems from the workplace, and then that stress goes on to contribute to illness and absenteeism that are more costly than any review process may be. Using check-ins and closer monitoring instead of reviews can help counter this stress and offer a more personalized approach.

Performance reviews have become simply unmotivating for most employees. Terri Rundell, the owner and experience designer of Dezign2Think, notes that performance review protocol often forces a “false distribution” that leaves the majority of employees rated as “average.”

Quite frankly, the implication that most employees will be rated as average is motivating and inspiring to almost no one, except for perhaps employees that are low performers already. Positive feedback also has a motivational impact for so long. The motivation from a single good review is unlikely to last the whole year.

Now that managers are catching up to what employees have been noticing for a while, the time has come for a shift in performance management paradigms. And it appears that most are in agreement that such a shift most definitely means it’s time to ditch the yearly review and switch to more sustainable and flexible performance monitoring and management options.

The Hard Truths of The Changing Labor Market