Press Releases Prodoscore Survey: 90% of U.S. Workers Are Open to Their Employer Having Visibility Into Their Daily Productivity

Prodoscore Survey: 90% of U.S. Workers Are Open to Their Employer Having Visibility Into Their Daily Productivity

‘Visibility software’ was #1 answer when asked what would be most beneficial to employees’ productivity. 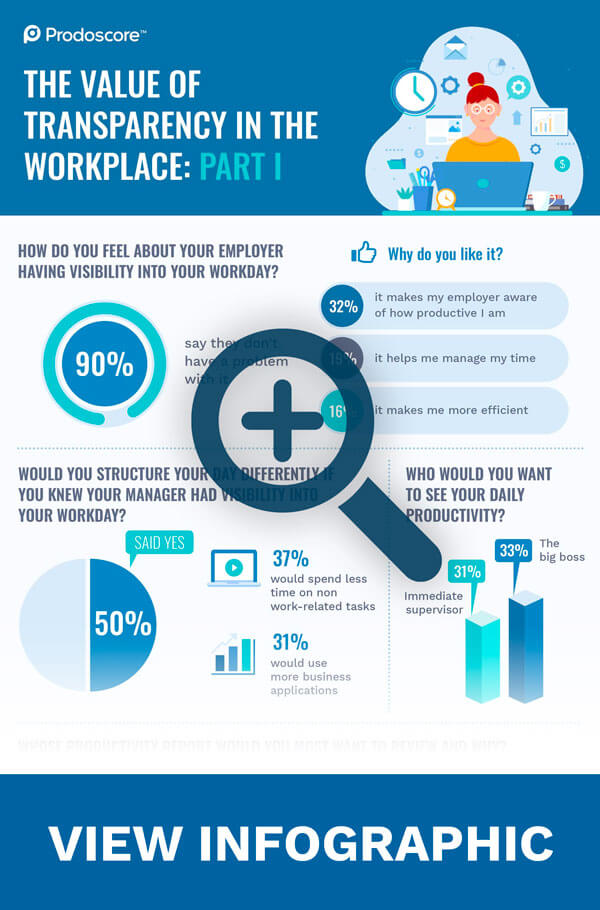 Prodoscore, a leader in employee visibility and productivity software, today announced the results of a new survey detailing the attitudes of U.S. employees across the spectrum of company sizes and industries toward visibility, productivity and other work-related topics. At a high level, the findings showed that an overwhelming majority of employees – 90% – are open to their employer having visibility into their daily productivity. And, when asked what would be most beneficial to their productivity, the #1 answer was “visibility software.”

The company commissioned the research to put real numbers to trends they had been noticing for a few years as work from home (WFH) arrangements slowly gained traction and that were recently amplified in the wake of COVID-19. With the vast majority of respondents – 77% – currently working from home at least part of the time (vs. 61% prior to COVID-19), visibility into employee productivity has become a more important issue to employers and employees alike.

Visibility is not only possible, it is desired by employees

On the topic of visibility into their daily work, only 10% of respondents chose the “I don’t like it” option. Respondents who “liked” visibility opted for one of three choices for doing so: makes them aware of how productive they are (32%); helps them manage their time (19%); and makes them more efficient (16%). Another 23% indicated that they “didn’t care.”

One of the drivers of the openness to employers using visibility tools relates to recognition. Almost half (47%) said they have been frustrated by their efforts not being recognized. And, when asked how they would feel about a tool that allows their daily contributions to be recognized versus only the end result, 80% responded positively for either the recognition-identifying tool alone or a combination of a tool and the end result.

Exactly half of respondents (50%) said they would structure their day differently if they knew their manager had visibility into their workday. When specifically asked what they would do differently, 37% said they would spend less time on non-work-related tasks (such as social media and chores), 31% would spend more time using business applications related to their job, and another 25% would take fewer breaks.

When asked what they thought would be most beneficial to their productivity at work, the highest-polling answer was “visibility software that helps identify ways to be more efficient,” with 32%. Rounding out the top three choices were collaboration tools with 25% and videoconferencing software with 21%.

“We were not surprised to learn that the majority of employees surveyed were not only open to giving employers visibility into their workday but welcomed it,” said Sam Naficy, CEO of Prodoscore. “With so many people working from home, there is an even stronger desire now from both employers and employees to make use of visibility tools like Prodoscore’s in a positive, helpful way. No employee likes spyware, but, as the results show, most do like tools that help them be more efficient and productive while simultaneously demonstrating their value to their employers.”

The company plans to announce in August survey results focused on productivity.

The survey was conducted in July 2020 in partnership with Propeller Insights. It polled 1,000 U.S.-based workers across diverse industries and included a mix of micro, SMB and enterprise businesses. Most respondents were white-collar workers (79%), with 11% being gray-collar and 10% being gold-collar.

Prodoscore™ is a company dedicated to empowering teams to be more effective and productive, validated with improved sales performance and time management metrics. By providing visibility into employee activities through a single, easy-to-understand Productivity Score™, a “prodoscore” is calculated to improve workforce productivity. Prodoscore works seamlessly with Google Cloud apps, Office365, CRM systems, and VoIP calling platforms, allowing it to be quickly implemented and maintained. Learn more at prodoscore.com.